With the expansion of China’s economic and military strength we already see a growing nationalism and belligerence not only by the Chinese government, but also on the part of a section of Chinese public opinion—especially among the ruling bourgeoisie and the now quite large urban “middle class”. This sort of thing is inevitable in any imperialist country, especially in one that is ambitious and still rising and growing continually stronger.

All this is illustrated very well in the disputes over various tiny islands in the South China Sea, disputes which have become much more serious in 2012-2014. There have been competing claims over the ownership of these islands (or in many cases just reefs occasionally protruding from the sea) for many decades. But in recent years these disputes have become much more heated. And why is that? It is primarily because China has begun pressing its claims much more strongly, sending its PLA Navy ships out to patrol the areas around these islands or rocks, setting up military installations on some of the larger islands, and so forth. The Philippines, Vietnam, Taiwan and others have in turn also escalated their own demands with regard to these islands and reefs, and sent out their own patrol boats. There is now the real possibility that there might develop one or more wars over these rocks!

These islands, or shoals, have little intrinsic value, but officially owning them also means owning the sea and sea-floor areas around them, out to as much as 200 miles with regard to economic exploitation. That means valuable fishing rights, and also potentially very important undersea oil, gas and mineral rights. So it is not just China’s growing nationalism and assertiveness which is at work here, but also the desire of all these countries to secure new territories for economic exploitation, especially now that deep-sea oil drilling has become technologically feasible (if still very dangerous for the environment). But still, it has been China’s new aggressiveness which has directly led to this sudden rapid escalation of demands and threats from all sides.

In addition, ownership of these islands and shoals means having the ability to establish forward radar sites and other military installations on them, and to better control the entire South China sea from a naval perspective. So while it may seem that all the fuss is just over “rocks” but in reality there are much more important matters at issue.

On July 24, 2012, China unilaterally established the Sansha prefecture to “oversee and administer” one million square miles of the South China Sea. As of January 1, 2013, this oceanic prefecture was unilaterally invested by the Chinese government with the police authority “to board, seize and expel foreign ships” from this vast area.[1]

One such set of rocks in this “prefecture” is known as the Scarborough Shoal, which lies 115 miles from the Philippines coast. In the past year China sent a fleet of 90 ships to the area which have barred Filipino fishing boats from operating there. Similarly, China dispatched some naval frigates to the Ayungin Reef (also known as the “Second Thomas Reef”), which is 105 miles from the Philippines, to do the same thing. Control of the Ayungin Reef probably means control of the Recto Bank (underwater mounds in the sea) about 85 miles from the Philippine coast, which the U.S. Energy Information Administration estimates might contain 213 billion barrels of oil and 2 quadrillion cubic feet of natural gas.[2]

There have been numerous outraged comments about China’s claims and encroachment on these islands from the Philippines. Some politicians there have called China’s claim “the most brazen maritime grab in history” and stated that China’s behavior “is that of an imperial state, imitating the expansionist conduct of the western powers it condemns”. However, President Benigno “Noynoy” Aquino has been particularly agitated in his condemnations of China, saying that Western powers must tell China that “enough is enough”, and comparing his country to Czechoslovakia being overrun by Nazi Germany in the period before World War II in Europe! [3]

There are many more islands, rocks, reefs or shoals which are lumped together, along with the reefs mentioned above, under the name of the Spratly Islands in the South China Sea. Some or all of these are claimed by not only China, but also by the Philippines, Malaysia, Taiwan, Vietnam and Brunei. And all of these countries except Brunei currently occupy and/or patrol some of these islands. (Many of the reefs are only above water at low tide.) The areas around these islands are also important for fishing and commercial shipping, and hold significant reserves of oil and natural gas. These islands too are part of China’s “Sansha prefecture”, but any attempt by China to force the other countries completely out of the area may lead to war.[4]

Probably even more dangerous is the growing contention between China and Japan over the uninhabited islands known as the Senkaku chain in Japan and the Diaoyu chain in China. This island chain northeast of Taiwan is close to key shipping lanes and rich fishing grounds, and it is also thought that there may be large oil reserves in the area. Rising Japanese imperialism grabbed these islands in 1895 along with Okinawa and Taiwan, but now rising Chinese imperialism demands them. There have been both Chinese and Japanese ships patrolling around these islands at different times, and increasingly vociferous threats from both sides.[5] Japan has also promised help to the Philippines and other countries in their disputes with China in the South China Sea.[6]

There has also been a lot of nationalist mass belligerence in China, on the Internet and in mass demonstrations in the streets, over the Senkaku/Diaoyu islands dispute in particular.[7]

Some Chinese government newspapers have even questioned the right of Japan to control Okinawa and the rest of the Ryukyu island chain.[8] Hundreds of years ago this island chain did have a long established “tributary relationship” with China. Will China someday go so far as to demand that all the lands over which the old Chinese Emperor once had a tributary relationship should actually still today be part of China?! This would include Mongolia, Vietnam, Korea—and perhaps even Japan itself! Well, it is unlikely that even the new Chinese imperialists will ever claim that much![9] Like other imperialists they have generally adjusted to the need for neocolonialism, rather than outright colonies or incorporation into China itself—at least with regard to other major Asian countries. It is a different matter with regard to reefs or small islands, however.

There have also been some recent border incidents between China and India, which suggest a somewhat more aggressive policy by China in that region. India provoked an outright border war with China in 1962, which it lost, and was forced to remove its “Forward Policy” military bases from the Chinese side of the de facto border. Despite minor incidents from time to time, things were mostly stable along that border until 2009 when there was a new (but quite limited) flair up. It is not known to us for sure which side was responsible for that incident, but the underlying motivation is clear (as one observer commented):

Since 2006, Chinese strategic experts, bloggers, retired diplomats and think tanks linked to the People’s Liberation Army have been discussing the possibility of a “partial border war” to “teach India a lesson.” Parallels are being drawn to the pre-1962 situation, when Beijing blamed India for Tibetan uprising and New Delhi provoked China with its “Forward Policy” on the border. China has referred to India’s current troop movements as a “New Forward Policy.” The Indian media, always wary of China, have chimed in by sensationalizing alleged border incursions and by hyping “the China threat.” India’s military has bolstered its presence in areas bordering Tibet. The military forces of both sides are once again pushing into remote and previously (for the most part) unoccupied mountainous frontier regions.

Adding fuel to this fire is mounting confidence on the Chinese side that China would win any conflict and reap broader strategic rewards from doing so. PLA generals believe India’s military remains inferior in combat, logistics and war-fighting capability. Should the PLA succeed in occupying Tawang, a town near the border, and giving India’s military a bloody nose, the Chinese thinking goes, Indian leaders would be much more deferential in dealing with China. A short and swift victory would underscore the need for other countries in Asia, especially U.S. friends and allies, to accommodate China’s growing power by aligning with, rather than against, Beijing.[10]

Frankly, there now appears to us to be growing imperialist/expansionist thinking on both sides of the Sino-Indian border!

Back in 1979 China, which was already controlled by Deng Xiaoping and his fellow capitalist-roaders, followed through on such a threat to teach another country “a lesson” via military attack. The Sino-Vietnamese War was initiated by China for geopolitical reasons. It was presented at the time as an effort to force Vietnam out of its recent invasion of Cambodia. But it was actually more about whether China or the Soviet-backed regime in Vietnam would have suzerainty over Cambodia and Laos. I.e., it was about competing imperialist spheres of control. As Henry Kissinger, that notorious American master of “realpolitik” put it, “Whatever the shortcomings of its execution, the Chinese campaign reflected a serious, long-term strategic analysis.”[11]

There was another incident along the Sino-Indian border in April 2013, but it was very minor. A platoon of Chinese soldiers ventured 20 km inside what the Indian side considered the previous line of control and refused to leave for three weeks.[12] Tensions rose, but then both sides backed off.

However, much greater contention between China and India is developing because of China’s naval expansion into the Indian Ocean. Since 2008 the Chinese PLA Navy has sent at least 10 missions to “fight piracy off of Somalia”.[13] More significantly, however, there has been a rapid expansion of Chinese submarine activity in the Indian Ocean, according to the Indian Navy. 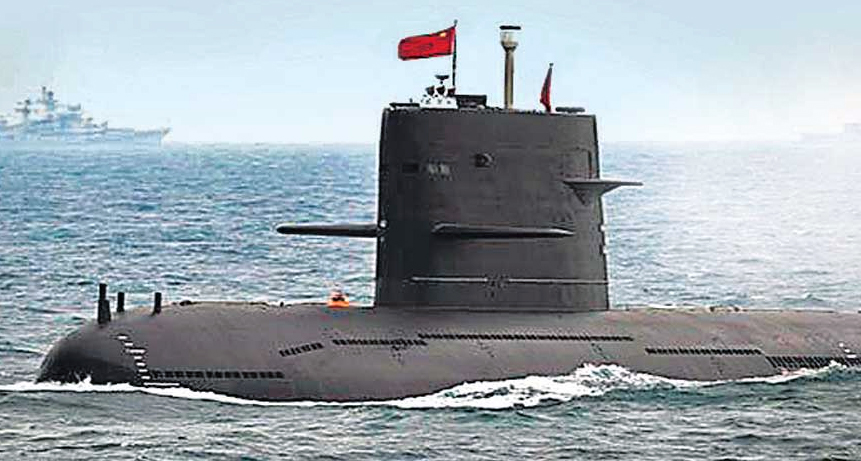 A Chinese submarine operating in the Indian Ocean[14]

During the Mao era, when China was a genuinely socialist country, there was very strong opposition to imperialism and against imperialist operations in Asia especially. Revolutionary China went so far as to risk its own survival by directly supporting Korea in the Korean War, and by helping Vietnam on a tremendous scale during the U.S. imperialist war against Vietnam. In both wars the U.S. seriously considered attacking China with nuclear weapons! These anti-imperialist actions were carried out by China on the basis of proletarian internationalism.

[3] Ibid.; Tom Phillips, “Philippine president compares China’s expansion to Nazi Germany”, The Telegraph [U.K.], Feb. 5, 2014, online at: http://www.telegraph.co.uk/news/worldnews/asia/china/10618722/Philippine-president-compares-Chinas-expansion-to-Nazi-Germany.html It should be noted that Benigno Aquino is perhaps the most prototypical comprador politician in the world today, and it is no wonder that he would raise the call of alarm against China in the most extreme way, and wildly call on “the West” (meaning the U.S.) to take on China before it is “too late”.

[4] For information on the competing claims and areas of control in the Spratly Islands, see the Wikipedia entry at: http://en.wikipedia.org/wiki/Spratly_Islands_dispute

[9] Luo Yuan, a two-star general in the PLA who raised the issue of the status of Okinawa and the Ryukyu island chain in the People’s Daily did however add in an interview:

[11] Henry Kissinger quoted in the Wikipedia article on the Sino-Vietnamese war, online at: http://en.wikipedia.org/wiki/Sino-Vietnamese_War